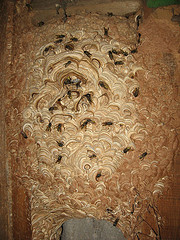 If you discover that there is a wasps’ nest on your property, please get in touch with our wasps’ nest control experts promptly. Don’t make an attempt to take on the nest by yourself, it’s extremely dangerous and you may very well endure many stings. Also, and more importantly, don’t make an attempt to close the nest entry with cement adhesive or mortar etc., you’re going to drive the wasps into your house!

4 Common Types of Wasps Found in the U.S.A.

The Dangers of Stinging Insects

While a single sting is normally only painful and irritating for a few days, it can be life-threatening to someone who is allergic. Even for somebody who has no bee or wasp allergy, an attack by a swarm of wasps or other stinging insects can be highly dangerous — as these stings become poisonous in large quantities.

Bees and other stinging insects typically build their hives in areas with low human traffic: up in trees, on porches, underneath gutters, and even in crawlspaces below houses. If you find one or more on your property, contact the stinging insect and wasp removal team at 888-988-7082. We can inspect your surroundings, identify the exact insect species, and create a plan to safely remove them.

Having an active bug population is crucial for the health of plants and animals throughout the USA. But even though bees are typically harmless as they buzz around pollinating plants and flowers, having too many on your property can be a serious problem. Bees / Wasps don’t typically show aggression on their own, but they may sting and swarm if they feel their hive or queen is in danger. While it is impossible to guarantee that bees and wasps on your property won’t sting you, there are some precautions you can take to reduce the chances:

The best way to prevent a sting is to have bees, wasps, and their hives or nests professionally removed from your property. To make sure stinging insects won’t stir up any more trouble around your home, the professionals at 888-988-7082 will safely remove and relocate them to a secluded, safe area.

In spring over wintering wasp queens leave their hibernation and start building new nests with a papery material that she makes by chewing small pieces of wood mixed with saliva. This is known as Wasp Paper. She will raise the first few workers by her own efforts and those workers will then commence the enlargement of the nest and caring for the immature wasps to follow.

Nest construction starts in earnest in June and will reach its maximum in size in August and September, when
5000 – 20,000 workers may be present. In late autumn the nest produces up to 2000 queens to hibernate and build new nests the following spring. The nest itself is then spent and never used again.

A wasp nest should never be approached unprotected as wasps will readily attack to defend their nest and it is possible to sustain a large number of stings.

Individuals react differently to being stung by wasps, some are hardly affected, others suffer considerable pain and swelling and a few become seriously allergic to being stung, which in some cases results in sudden death due to anaphylactic shock.

A wasps’ nest starts at the end of spring usually about April when the queens leave hibernation and start nest making. As opposed to honey bees, only queens survive the winter months, the rest of the colony having died off the previous winter.

The queen develops a little nest from ‘wasp paper’, which she can make by mixing rotting wood with saliva.

This preliminary nest is approximately the size of a golf ball, within it she lays something like 20 eggs which hatch-out into larvae. These she nourishes with aphids and grubs until they pupate and hatch into fully fledged wasps. These younger wasps should then manage nest building whilst the queen will stay inside the nest laying eggs.

This whole process takes a few weeks and it’s unusual indeed to discover a wasps’ nest in advance of June. The busiest period of nest expansion is usually the month of June and wasps’ nest control always estimate that the wasp season usually starts around the 3rd week in June.

If left to its own devices the nest continues to grow over the summer and dependent upon weather and accessibility of food will contain between 5000 – 30,000 wasps at its peak.

When the worker wasps feed the larvae within the nest they’re rewarded by the larvae which express a sweet sticky product which the wasps crave and thus this is their reason to tend to their young.

Up to around August time the nest makes only sterile females but as the days start to draw in it will make its last batch of larvae which are new queens and males. Typically a nest will create about two thousand new queens.

It’s at this stage when wasps usually are their most troublesome. When the nest is no longer making young, the worker wasps are missing out on their sweet fix and start needing sweet foods. They begin feasting on fermenting fruit and as they’re effectively unemployed they turn into a nuisance pest. It’s now when most stings occur.

It’s also the time when coping with a wasps’ nest becomes a lot more difficult since the when the queens come out they will no longer go back to the nest so are not eliminated by any pesticide inside it.

At this stage of year we have many reports of persons getting a huge amount of wasps within their houses each day, these are the new queens in search of hibernating sites.

A number of Local Authorities at that time of the year will tell enquirers to leave the nest alone as ‘it is going away soon’. This is actually the very worst thing that can be done since the queens will emerge making the entire process more troublesome.

Once this procedure has started, commonly from mid-September, it is usually recommended to perform supplementary work, for example smoking or fogging the attic space to get rid of these queens which typically carries extra costs. One of the best suggestions for wasps’ nest control can offer is when there is a wasps’ nest get it eradicated before September and this will save you lots of trouble.

Left to its own devices a wasps nest can live until the first main freeze of wintertime, they survive later in to the the autumn months than most people expect. Wasps’ nest control generally destroy a variety of wasps’ nests even into late November and December and the latest we’ve handled an active nest was Christmas eve!

When the cold season comes the queens hibernate and all the other wasps, workers and males, die. The nest is then finished, it will never be lived in again and therefore there is absolutely no advantage at all in looking to remove it.

A wasps’ stinger is a modified ovipositor and as a consequence only female wasps can sting but few would want to take a risk on guessing the correct sex of the wasp facing them.

There’s no need for our wasps’ nest control experts to tell apart the kinds of wasp we’re eradicating so as to destroy the wasps’ nest. All of the pest species have the identical biology and respond to the exact same treatment.

What governs the quantity and scale of wasps’ nests isn’t the harshness of the last winter but the weather in springtime. The hibernating queens can make it through any amount of cold.